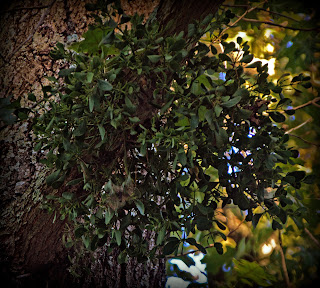 Most people are familiar with the tradition of kissing under the mistletoe at Christmastime, but have you ever wondered why this little evergreen plays such an interesting role during the holiday season? In fact, this is just one of many customs involving mistletoe. Traditions that include mistletoe are found throughout history and date back as far as ancient Greece.

Mistletoe is the common name for a number of plants in the order Santalales. The name mistletoe is typically applied to Viscum album, European mistletoe, and Phoradendron leucarpum, American mistletoe. Both of these species are considered partial parasites, or hemiparasites because they are capable of producing their own food through photosynthesis. Mistletoe grows on the branches or trunk of trees and sends out roots that penetrate the tree and take up nutrients. Mistletoe has developed a very specialized structure called a haustorium that grows into the host. It’s possible for mistletoe to kill its host plant, but such an occurrence is uncommon since the mistletoe itself would also die. It mainly depletes the host of water and could, therefore, severely harm the tree during a drought.

While often considered a pest that only causes damage, mistletoe has recently been recognized for its ecological benefits because it provides food and shelter for a variety of animals, such as Northern spotted owls, marbled murrelets, diamond firetails, and painted honeyeaters. More than 240 species of birds that nest in foliage in Australia have been recorded nesting in mistletoe, which demonstrates that mistletoe can have a positive effect on biodiversity.

European mistletoe has evergreen, smooth-edged oval leaves in pairs along a woody stem with waxy white berries in dense clusters of 2-6. It is usually seen on apple trees and occasionally on oak trees. American mistletoe is similar but has shorter, broader leaves and longer clusters of 10 or more berries.

From earliest times, mistletoe has been one of the most magical, mysterious, and sacred plants of European folklore. Some believed that mistletoe first became poisonous because it was growing on a tree that was used to make the cross on which Jesus was crucified. Because of this, it was cursed and denied a place to grow on earth and forced to be a parasite. In the Middle Ages and later, branches of mistletoe were hung from ceilings to ward off evil spirits. In Europe they were placed over house and stable doors to prevent the entrance of witches. When hung in the home, it symbolized purity and strength and promoted happiness, romance, and peace. In fact, custom called for enemies meeting beneath the mistletoe to throw down their weapons and embrace.

In some parts of England, Christmas mistletoe is burned on the twelfth night lest all the boys and girls who have kissed under it never marry. Some believe it can ward off demons, and protect those who wear it from fits, fever, tremors, and poison, even though the plant itself is poisonous. Surprisingly, in parts of England and Wales, farmers once gave the Christmas mistletoe to the first cow that calved in the New Year to bring luck to the entire herd. This tradition suggests that cows are either immune to the poison or are able to handle it in small doses. 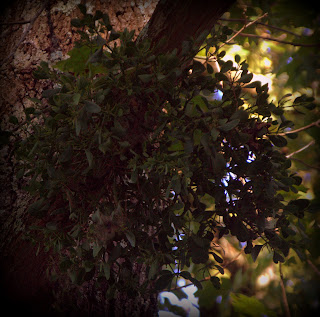 The ancient Celtic Druids greatly revered the plant especially when it was found growing on an oak tree, another plant they considered sacred. The mistletoe was ceremoniously cut with a golden sickle by a Celtic priest and caught on a white cloth so as to avoid touching the ground. This ceremony coincided with the winter solstice and thus began the winter celebration. They believed mistletoe could provide fertility to humans and animals, cure diseases, and protect people from witchcraft. The Druids also believed that mistletoe protected its possessor from all evil, and they sent round their attendant youth with branches to announce the entrance of the New Year. This may be the origin of the tradition of decorating with mistletoe at Christmastime.

A possible source for the custom of kissing beneath the mistletoe is the Scandinavian story of the slaying and resurrection of Balder, the god of peace. He was killed by an arrow made of mistletoe and brought back to life by his mother Frigga, the goddess of love. She removed the mistletoe’s poison with her tears. When Balder came back to life she kissed everyone who passed underneath the mistletoe out of happiness and gratitude. Thereafter, it was ordained that everyone who passed under the mistletoe should receive a kiss to show that the branch had become an emblem of love, and not of hate.

Mistletoe has a long and colorful history, making it much more than a piece of decorative shrubbery. Next time you encounter this mystical plant you might think about its many uses. And for those who wish to observe the proper etiquette involving mistletoe at Christmastime -- a man should pluck a berry when he kisses a woman under the mistletoe, and when the last berry is gone, there should be no more kissing!

For more information about this fascinating plant, visit this site: http://blog.nwf.org/2012/12/12-things-to-know-about-mistletoe/
Posted by heart of the garden at 9:10 PM