Legends of the Poinsettia, Christmas Cactus and Other Yuletide Plants 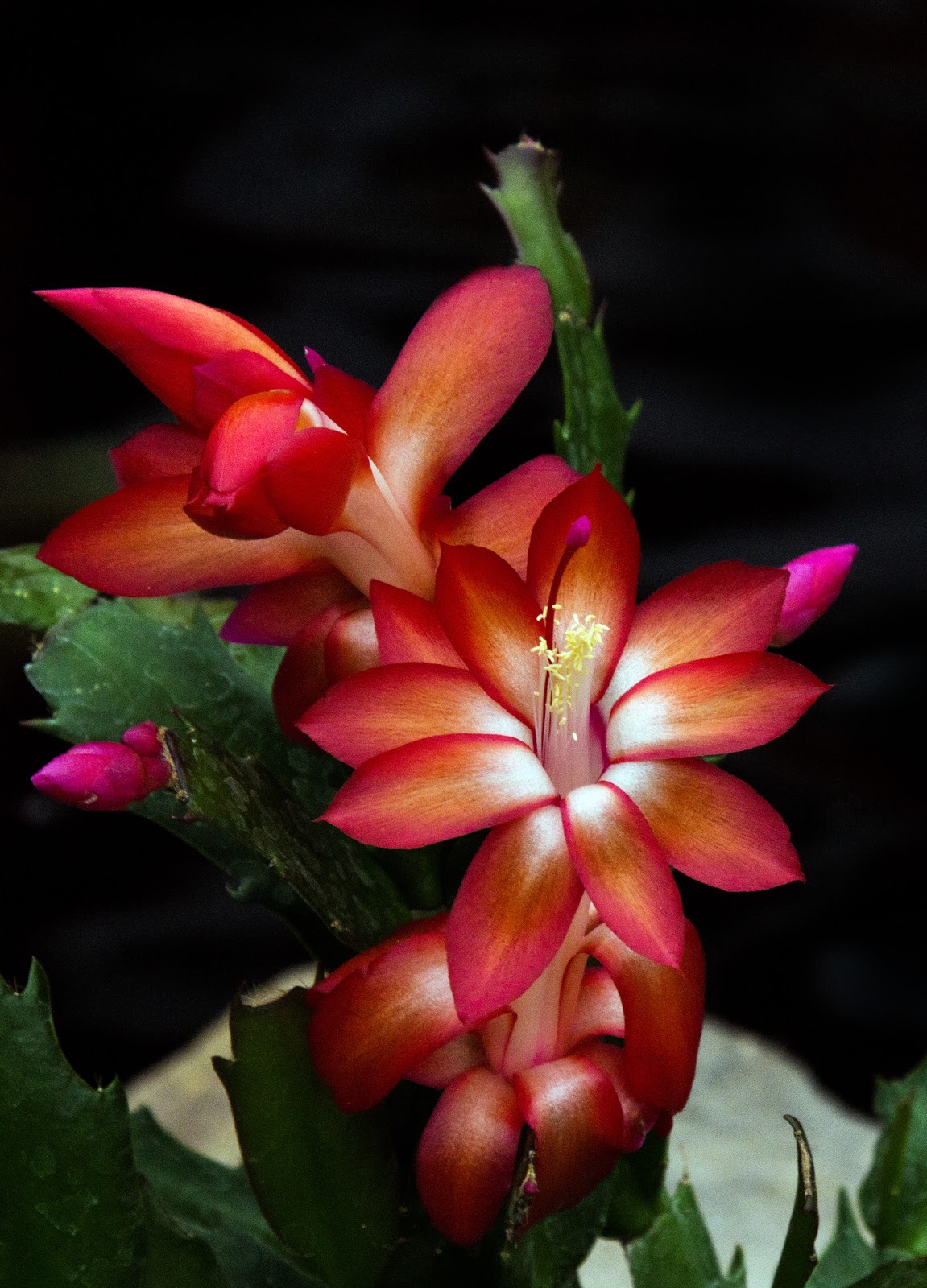 The Christmas season is fast approaching. Indeed, the commercial world would have us believe that Christmas begins right after Halloween, riding into our lives on the back of the witch’s broomstick. For many, Christmas is the most anticipated season of the year.

In the midst of the festive hullabaloo, standing calm and serene in their pots or on the mantelpiece, the plants associated with Christmas brighten our days and, if we let them, bring moments of calm to the otherwise hectic season. Several different ones are closely tied to the season – the amaryllis, poinsettia, and Christmas cactus.

Let’s close our eyes and let our imaginations wander back to a time before time began, to a place before places had names, to a tropical paradise like no other seen on Earth today. There, in the misty light of morning, we see creatures dressed in blazing red garments frolicking with joyous abandon among the lush greenery. They are the mysterious Poinsett sisters (not to be confused with the celebrated Pointer sisters of more recent times). Their one duty in life is to bring brilliant color to the jungle. And for eons they have fulfilled this task gladly. But somehow, this day will be different. A stranger has appeared during the night – a stranger dressed all in white, who has joined in the early morning dance ritual as if she belonged. Slowly the dancing stops, as the sisters gather around the stranger, still dancing enthusiastically. 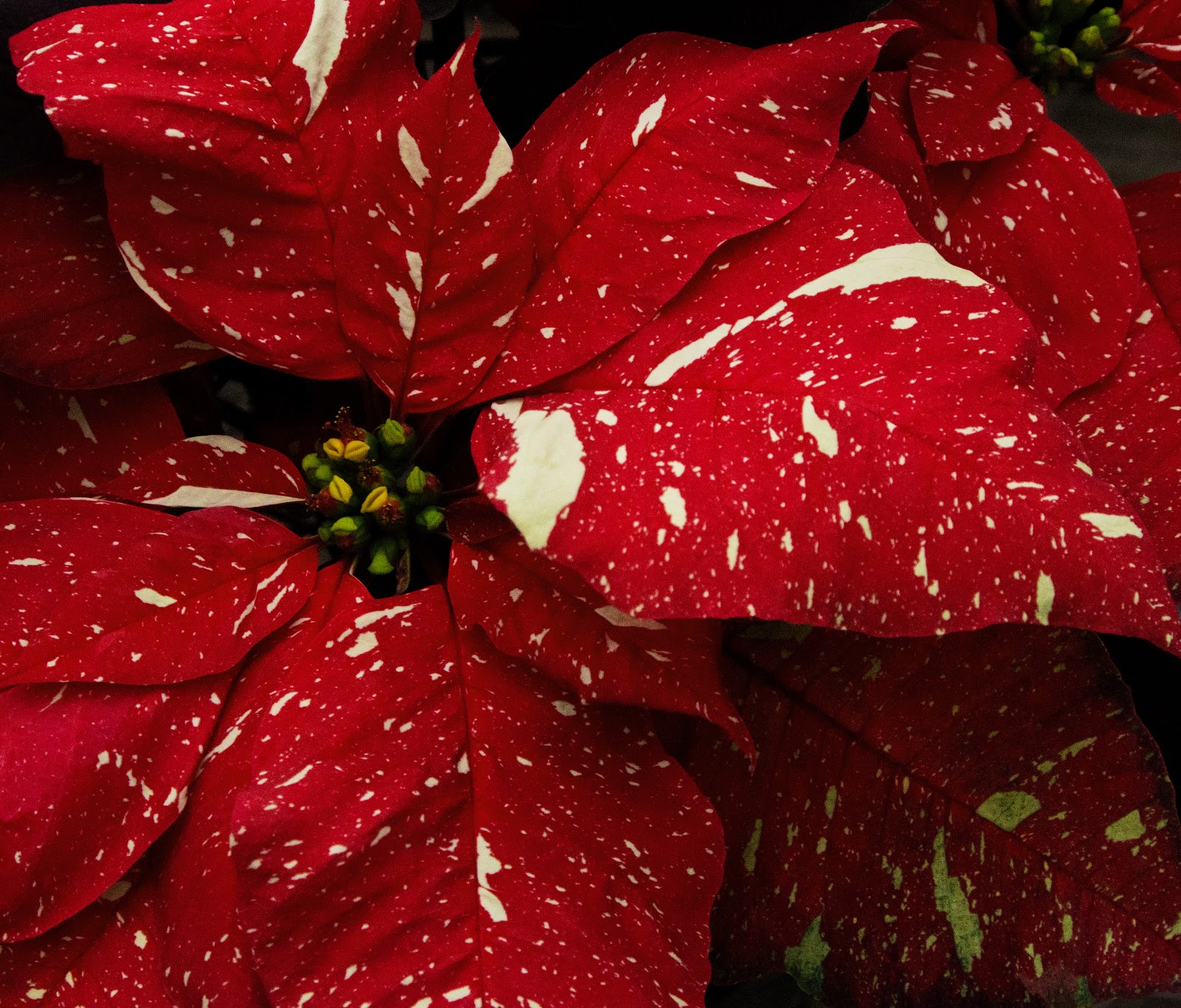 “Who are you?” one of the Poinsetts finally asked, “and where did you come from?” Smiling slyly, the stranger replied, “I am Ettia Poinsett, your cousin from a neighboring land. I am the mutant offspring of our mutual grandfather, who has predicted that I will become more popular than you ever have been! I have come to take over this colony, for I can dance with more wild abandon than any of you, and therefore am much better than you are!”

The sisters in their radiant red finery shuddered, for Ettia’s coming fulfilled an ancient prophecy – if ever there was evidence of a male influence in the Poinsett clan, all the members would instantly take root and never be able to dance again. Foolish Ettia, with her story of a grandfather, made the prophecy come true. As the sun brightened in that day long ago, each creature felt drawn to the soil as roots began to grow. Even Ettia, with her foolish prediction (that never came true) that white would be more popular than red, became rooted to the spot. And that is why, my friends, your poinsettia plants need plenty of sunlight, in memory of that day long ago and far away when frolicking wood creatures became plants to brighten our holiday homes! 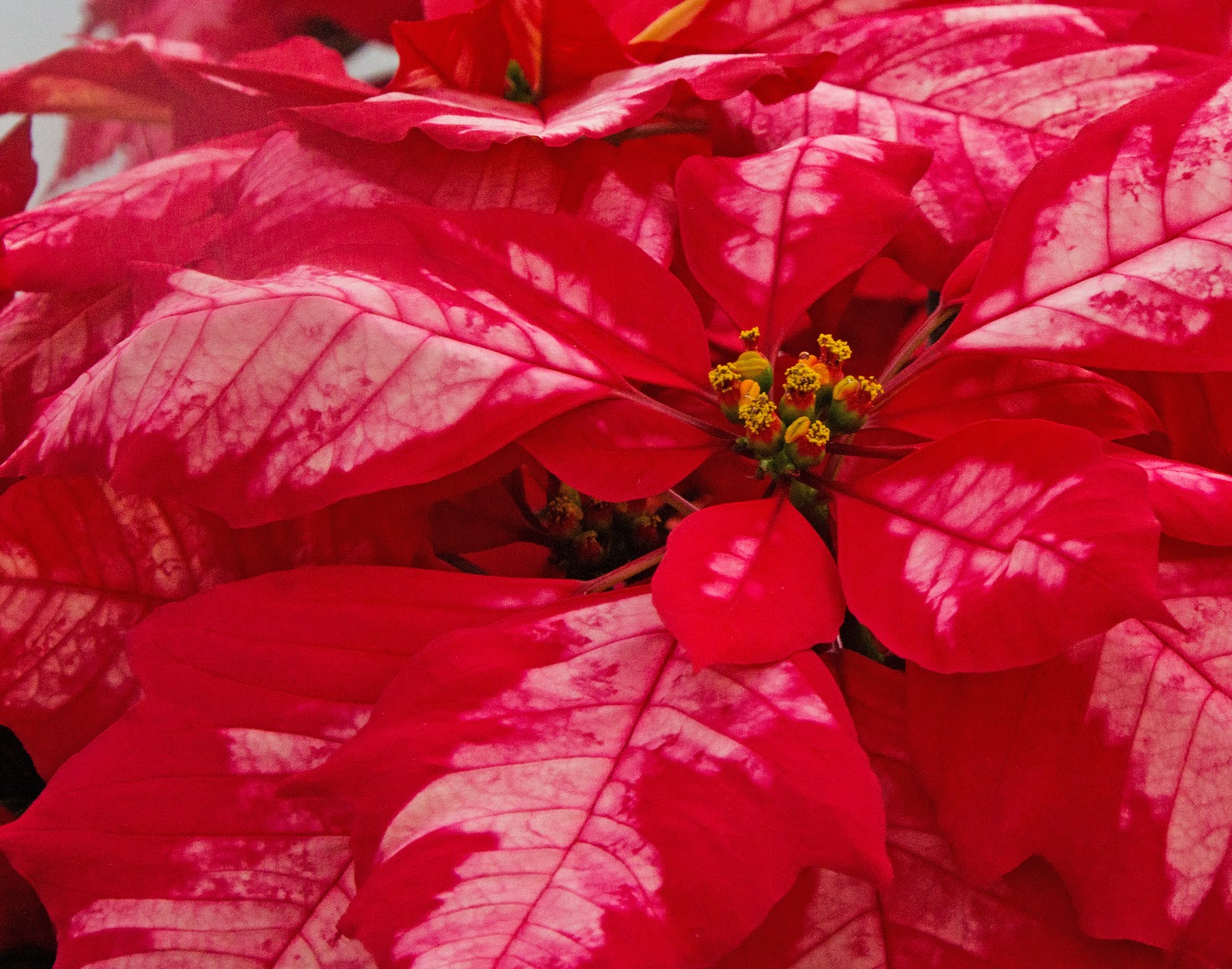 On the other side of the world, at about the same time that Ettia was spoiling the dance for the Poinsetts, another drama was unfolding for a family of tall folk called the Ryllises. These were stately folk, dedicated to bringing peace to the land in which they lived. Their leader, the head Ryllis, was a gentleman of limited intelligence who had been chosen because there had been a flaw in the system used to choose leaders. But as long as he was benevolent there was not much objection among the Ryllis population, and the citizens went about their peaceful pursuits without dissent.

One particular Ryllis, a beautiful maiden named Ama, was exceptionally adept at bringing about peace, and she was often sought after by mothers whose teenagers bordered on incivility from time to time. Amar had a regal bearing, tall and erect, with flaming red hair that she accented by wearing green garments most of the time. One day, however, sadness struck the Ryllises, for Ama was missing. Everyone looked high and low, far and near, up and down, but no Ama! She had been called out the afternoon before to calm a particularly high spirited teenager who insisted that his name was not Ryllis at all, but Tus, and that he belonged to the Christmas Tuses from across the hill. Legend foretold that if the most beautiful Ryllis were ever to disappear, and if the leader of the Ryllis did not intervene within 24 hours, the entire population would turn into plants, beautiful plants dedicated to peaceful pursuits at Christmastime, but plants nevertheless. The Ryllis leader was sleeping off a hangover on this particular day, and not being aware of the legend’s stipulation, his staff (who were as mentally lacking as he) did not disturb him. So it came about that, when Ama returned after being gone two days, she found only plants where her family had been before. Distraught, she chose to join them, and gave her beautiful name to the lovely flowers that we enjoy today! 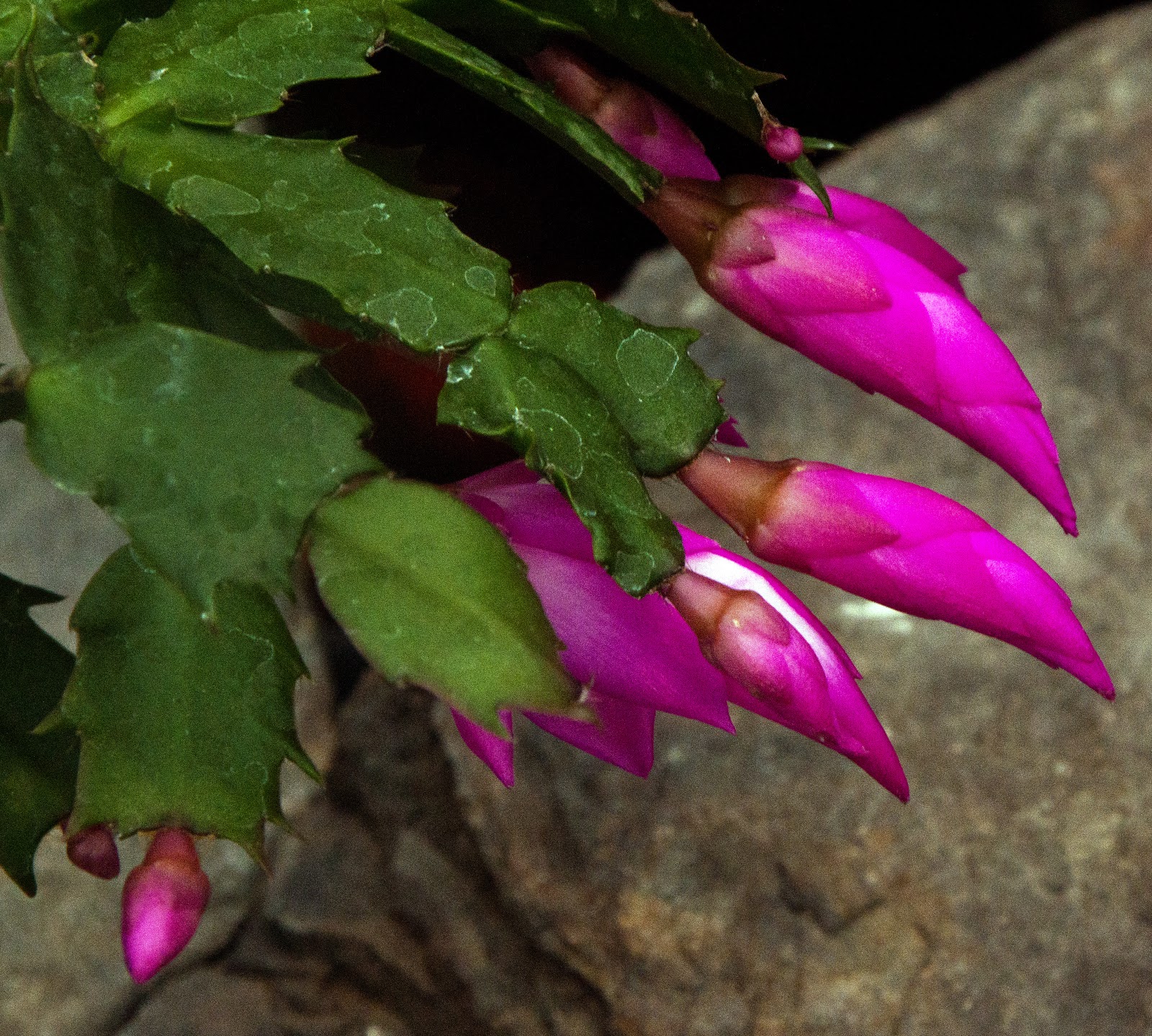 Meanwhile, the rebellious teenage Tus of the Christmas Tuses was causing as much trouble as ever. He belonged to a gang called the Cacs , and they engaged in every thorny, prickly pursuit imaginable. They turned over garbage cans, threatened to pull up all of the Ryllises (after they became plants), tied cans to raccoons’ tails, and in general got into as much high spirited devilment as they could think of. Living in the same part of the world as the Tuses was a member of the Clamen tribe who had exceptional magical powers. This individual, whose name was Cy, was greatly disturbed to learn what had happened to Ama Ryllis and her kinfolks as a result of the shenanigans of the Cac gang of Tuses, and he pondered and pondered, thought and thought, of an appropriate punishment for the teenagers.

Finally one day he had an “AHA!” moment, for he had thought of just the right thing to do. Traveling to the very neighborhood where the Cac gang hung out, he waved his magic wand and incanted “Mumbo, jumbo, somesopac, let roots grow out of each and every Cac!” And lo and behold, not only the Cac gang, but all Tuses began to grow roots. Cy waved his wand again and intoned “Abracadabra Asiatic power, may each one of you have a beautiful flower!” And it was so. But, true to Cy’s spell, the Cac-Tuses could only bloom if they became quite cold, a further punishment for having being so mean to Ama-Ryllis! 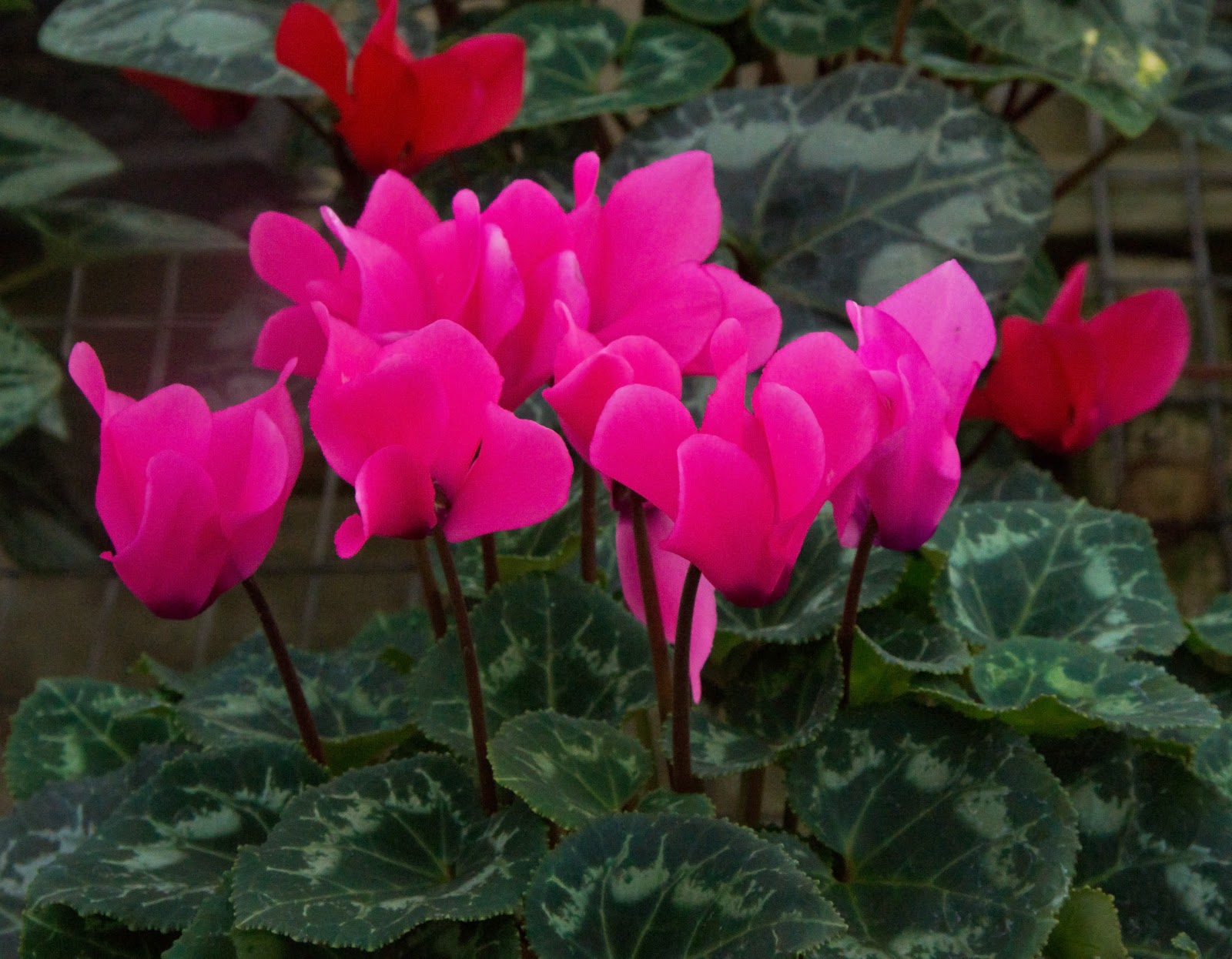 Next time you have a beautiful poinsettia, Christmas cactus, amaryllis, or cyclamen in December, remember their origins, and realize how very special these houseplants are!

Posted by heart of the garden at 8:34 PM