How to Avoid the February Garden Blahs

February can be a rather bleak month for gardeners unless they have included plants that offer later winter color and fragrance in their plantings. To learn more about some interesting plants, continue reading.

February is a difficult and fickle month for gardeners. It raises hopes with periodic warm days and then dashes them with ice and snow. Even so, the garden can offer a much needed respite from the February blahs. It’s a great month for fragrance, blossoms, and berries.

Edgeworthia or paper bush (Edgeworthia chrysantha) is a medium-size deciduous shrub that is a garden asset throughout the year. In February, however, it’s a star with both attractive blooms and unbelievable fragrance. The name edgeworthia commemorates Michael Pakenham Edgeworth, a Victorian amateur botanist who collected Edgeworthia chrysantha in the Himalayas. Chrysantha refers to the yellow color of the flowers. 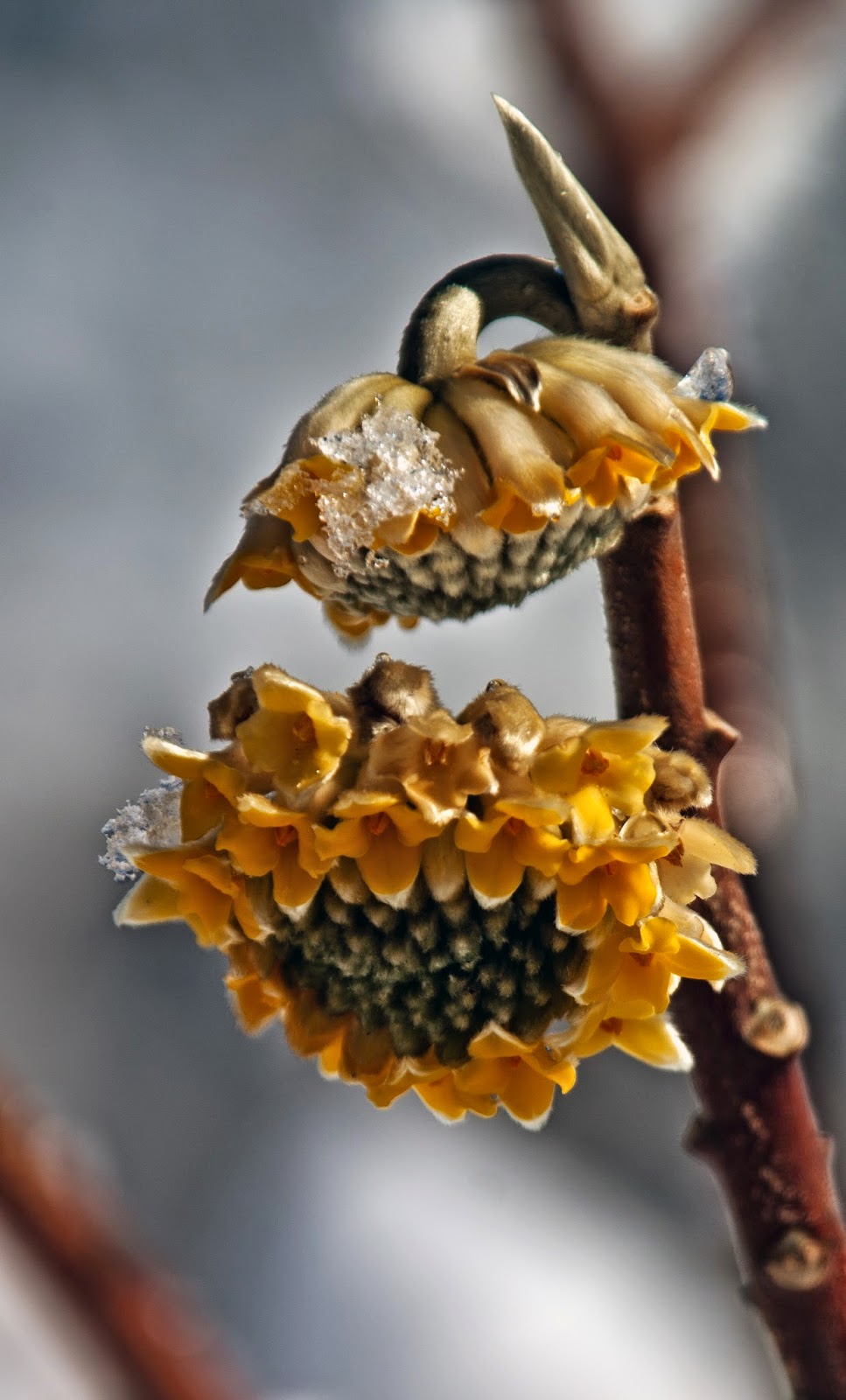 In summer, Edgeworthia has striking blue-green leaves. In late fall, the leaves drop and the beautiful, cinnamon-colored bark takes center stage. The silky, fuzzy flower buds also begin to swell and hang like ornaments at the end of each stem.  And then…in late February the flowers begin to open slowly over a six to eight week period. The flowers release an intoxicating fragrance that is reminiscent of both cloves and gardenias. The fragrance lingers in the cold, crisp air and is noticeable long before the bush can be seen. When the flowers first open, they are yellow and then gradually soften to a creamy white.

Edgeworthia is not particularly difficult to grow. It needs rich loamy soil, partial shade and plenty of moisture. Good drainage is essential. Once edgeworthia is well established, it can tolerate dry weather. Little pruning is required to maintain a tidy shape.
Edgeworthia is especially effective when planted near entryways or along paths where passersby can enjoy its fragrance. Companion plants that work well with edgeworthia include snow drops, crocuses, and hellebores.

For beautiful February blossoms, there are a number of choices – Camellia japonica, which starts blooming in January or earlier and continues until April; the yellow trumpet daffodil Rijnveld’s Early Sensation, which blooms right through January and February snow; and especially hellebores.

Hellebores have long been revered as tough, long-lived, winter-blooming perennials.  They are deer resistant. There are two kinds that are popular with gardeners -- Helleborus niger and Helleborus x hybridus. Helleborus niger is probably the best known of the species hellebores.  Although commonly known as the Christmas rose, in Zone 7 Helleborus niger often blooms in late January to early February. It has dark green, leathery leaves and generally one flower per stem. The large flowers are white, although the buds may be pink or the flowers may become deep pink as they age. This hellebore prefers shade to partial shade and rich, moist soil. It grows 6 to 9 inches tall. Helleborus niger doesn't like to be disturbed once it has become established in a particular location, but, if necessary, can be moved or divided in late summer or early fall and will bounce back in a year or so. 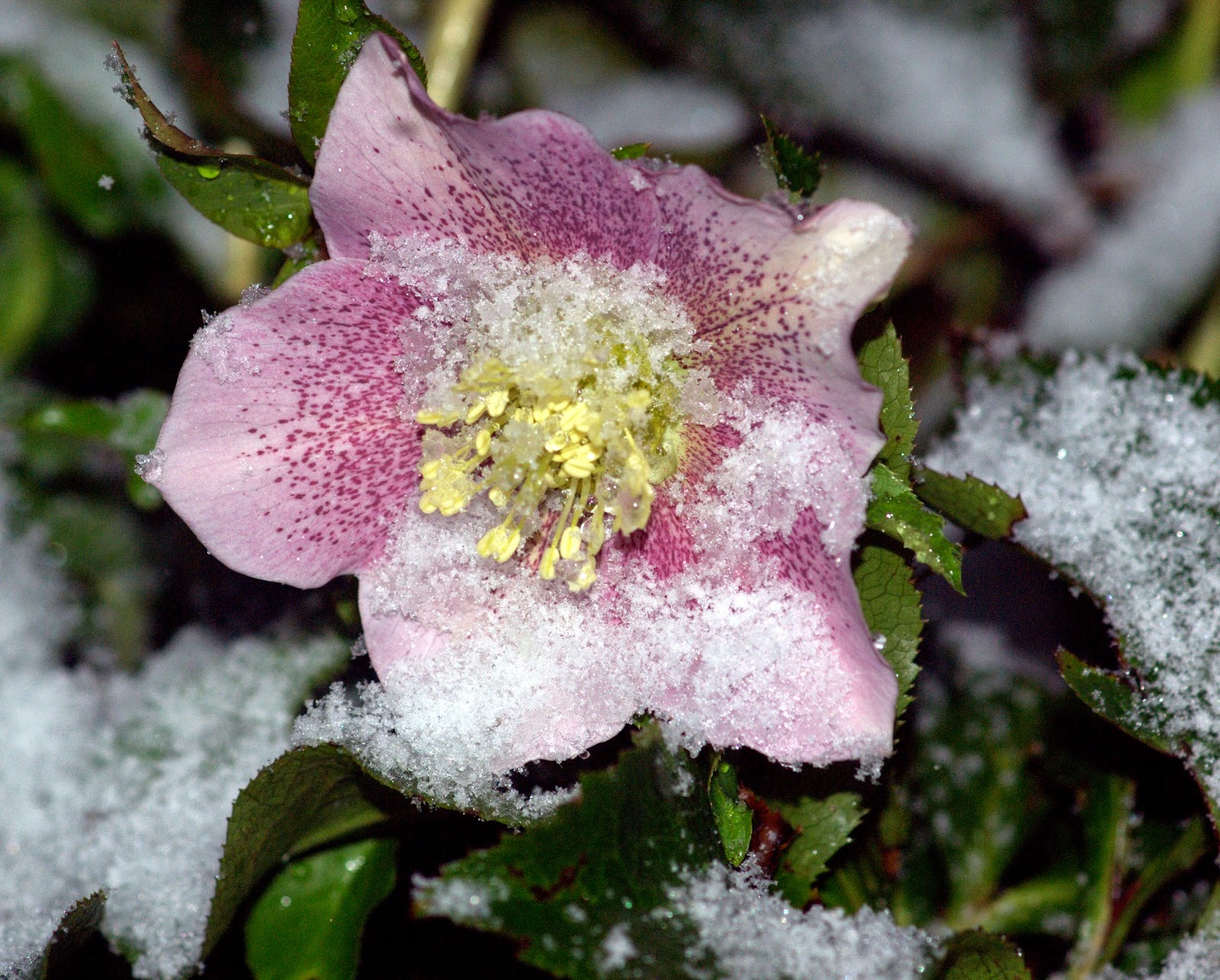 Helleborus x hybridus, the Lenten rose, was the 2005 perennial of the year. It is available in many different colors – white, black-purple to pink, yellow, cream, and green. The blooms may have speckles or picotee edges and can be semi-double to double.  A mature clump is about a foot tall, slightly larger than Helleborus niger. When the flower spikes emerge in late winter, they branch and produce clusters of flowers that can last for two months or longer. (Actually, what we commonly refer to as the flower is really a modified calyx.)

Helleborus x hybridus is the easiest hellebore to grow. Like Helleborus niger, it prefers partial shade to shade, as well as moist, rich, organic soil with good drainage. Once established, Helleborus x hybridus can tolerate considerable drought and neglect. By late winter/early spring, the old foliage tends to look very tattered and should be cut to the ground as soon as blooms appear. The old foliage should not be removed any earlier, however, because it helps protect the emerging new shoots from sudden changes in temperature.
Helleborus x hybridus can be used in many different ways in the garden. It makes an effective groundcover when planted in large groups. It works equally well under tall shrubs and as a contrasting plant in hosta beds. 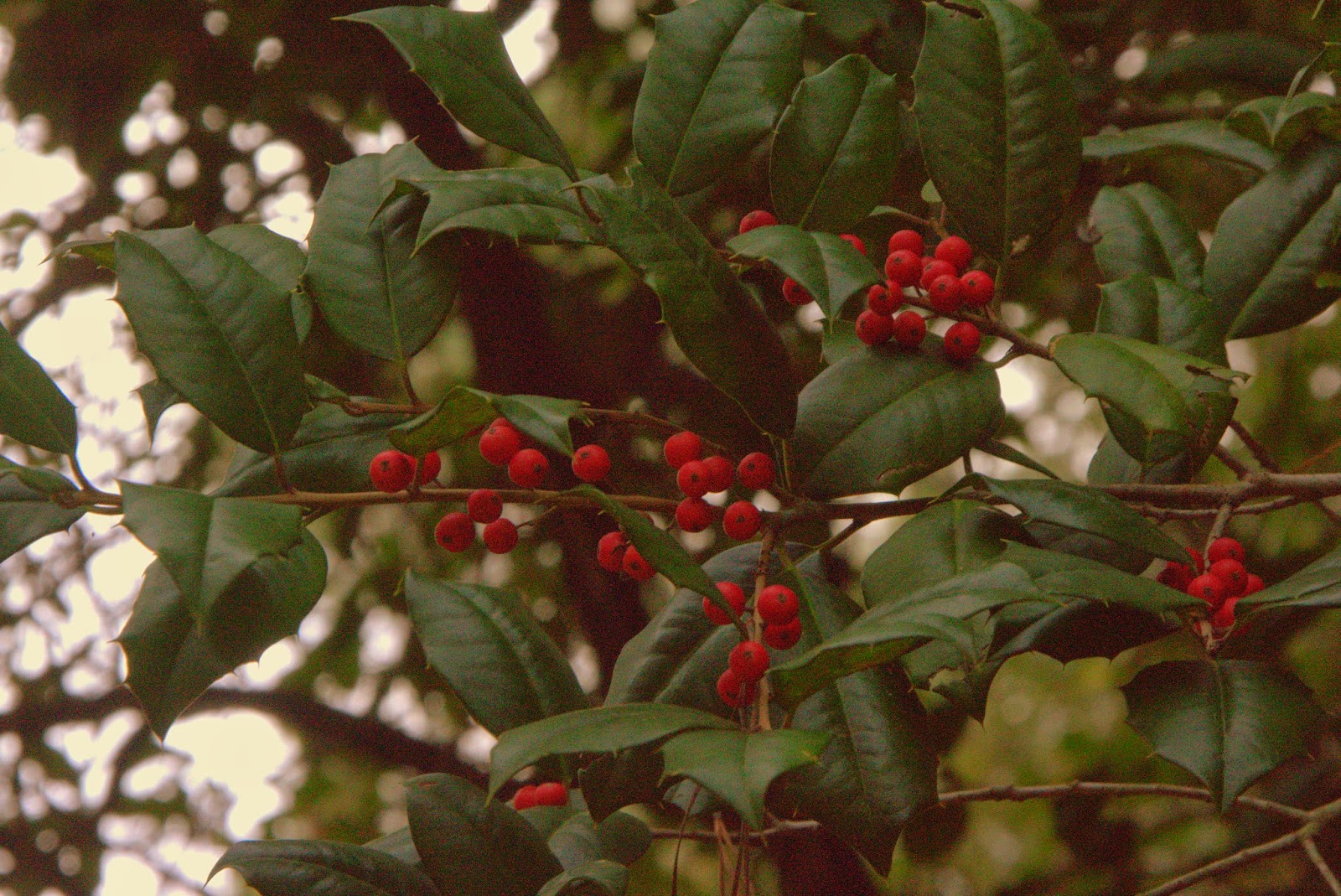 For berries in the winter garden, we tend to think of large shrubs and trees, such as the mahonias, the common winterberry (Ilex verticillata), and the American holly (Ilex opaca). But…I would like to suggest something quite different, the Native American plant Partridgeberry (Mitchella repens). It’s a quiet, unassuming, evergreen groundcover that’s quite effective in adding pops of color to corners of the garden. 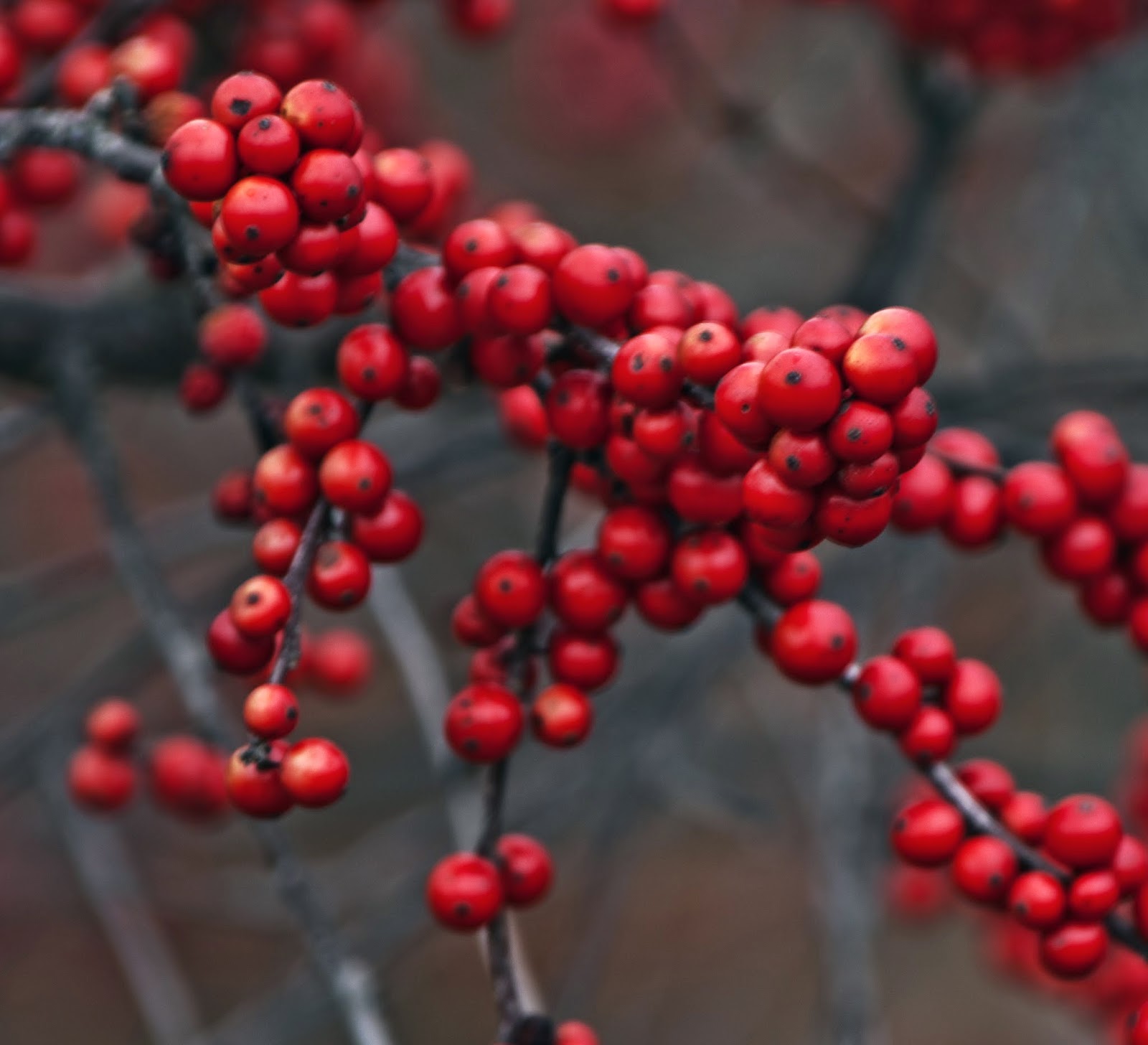 Partridgeberry has small, dark green leathery leaves. In spring, there are fragrant white flowers that always appear in pairs. The flowers are followed in fall by bright red berries that last throughout the winter. Each pair of flowers produces one berry. Partridgeberry is only about two inches high and is very slow growing, but is still capable of forming a dense carpet around trees and shrubs.

Partridgeberry prefers acidic soil in the wild, but will grow happily in alkaline soil in the garden. It needs good drainage and shade to partial shade. After it has been established for several years, partridgeberry will tolerate considerable drought. Cold winters are not a problem.


Partridgeberry is particularly effective in borders and along paths. No real maintenance is required.  Just remove the fallen leaves in autumn and enjoy. 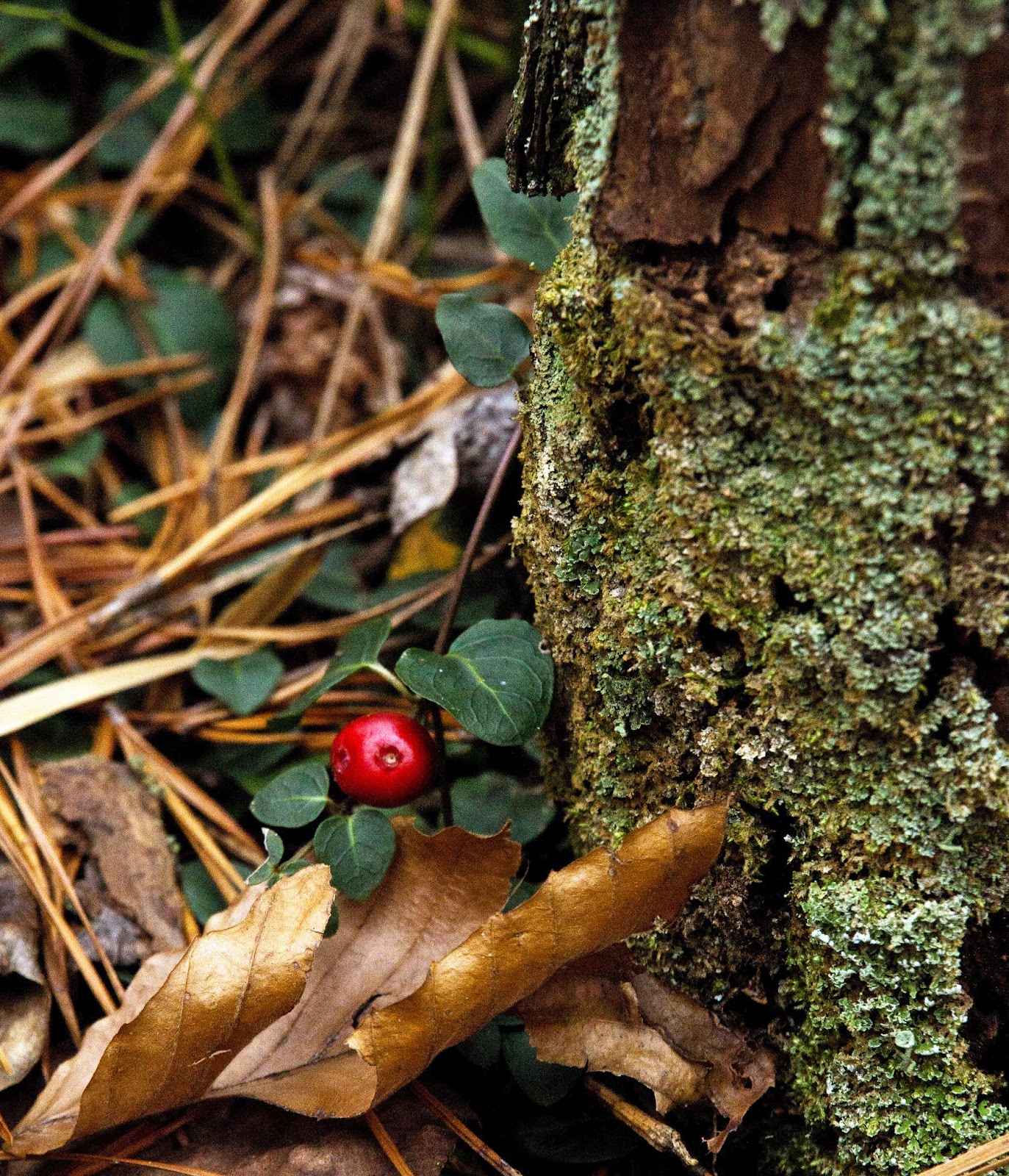 Posted by heart of the garden at 7:37 AM