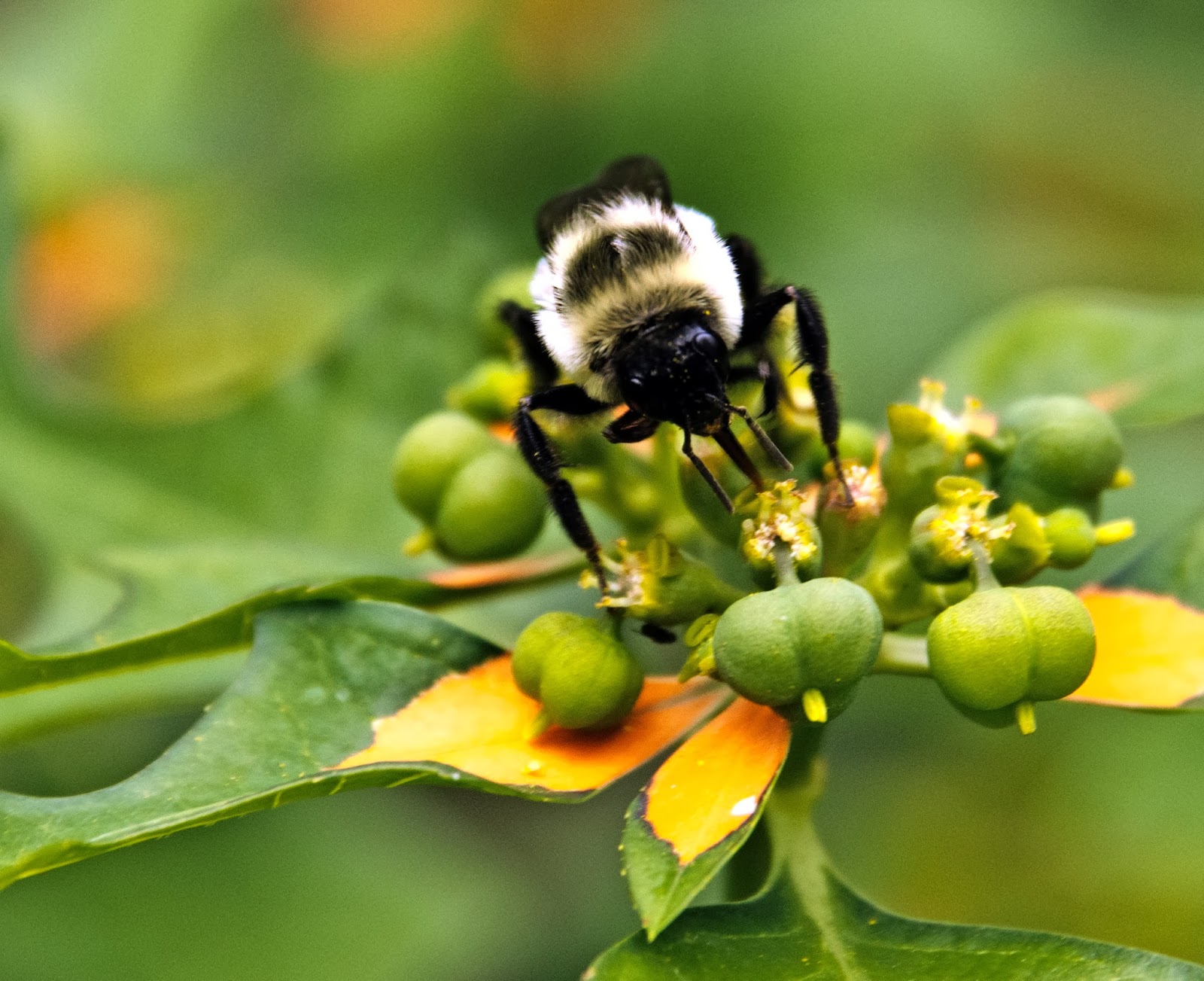 While we generally think of insects, bats, and hummingbirds as pollinators, the term is actually broader and includes all mechanisms that transfer pollen. Both wind and water can be pollinators too.  Pollinators are important to the well being of global ecosystems. There are around 200,000 animals that serve as pollinators and that’s good since almost 90 percent of all plants need the assistance of animals to transfer pollen. We humans are highly dependent on pollinators too. Animals pollinate about 75 percent of the world’s plants that are used for food, medicine, spices, and fibers.

Bees
Bees are important pollinators around the world. Here in the United States, there are about 4,000 species of native bees. With the exception of the bumblebee, these natives are solitary bees. They help pollinate crops, such as strawberries, alfalfa, apples, and blueberries. Flowers pollinated by bees tend to be showy and colorful.  Some plants, such as the rose and sunflower, have large, open blossoms that are easily pollinated. Others, such as the pink lady’s slipper and the foxglove, have more complicated blooms that are much more difficult to pollinate.

Butterflies
There are more than 700 species of butterflies native to North America. The butterfly's life cycle has four stages: egg, caterpillar, pupa, and adult. Adult butterflies feed solely on nectar. They  generally prefer large, colorful, fragrant flowers that have flat surfaces that can serve as landing platforms.

Sphinx Moths
There are far more species of moths than butterflies. Because they are nocturnal, however, they tend to be less well known as pollinators. Sphinx moths are some of the largest moths. They can fly very rapidly and hover in place. Some can even fly backwards. Sphinx moths are attracted to very sweet smelling flowers, such as Daturas, that are open at night. 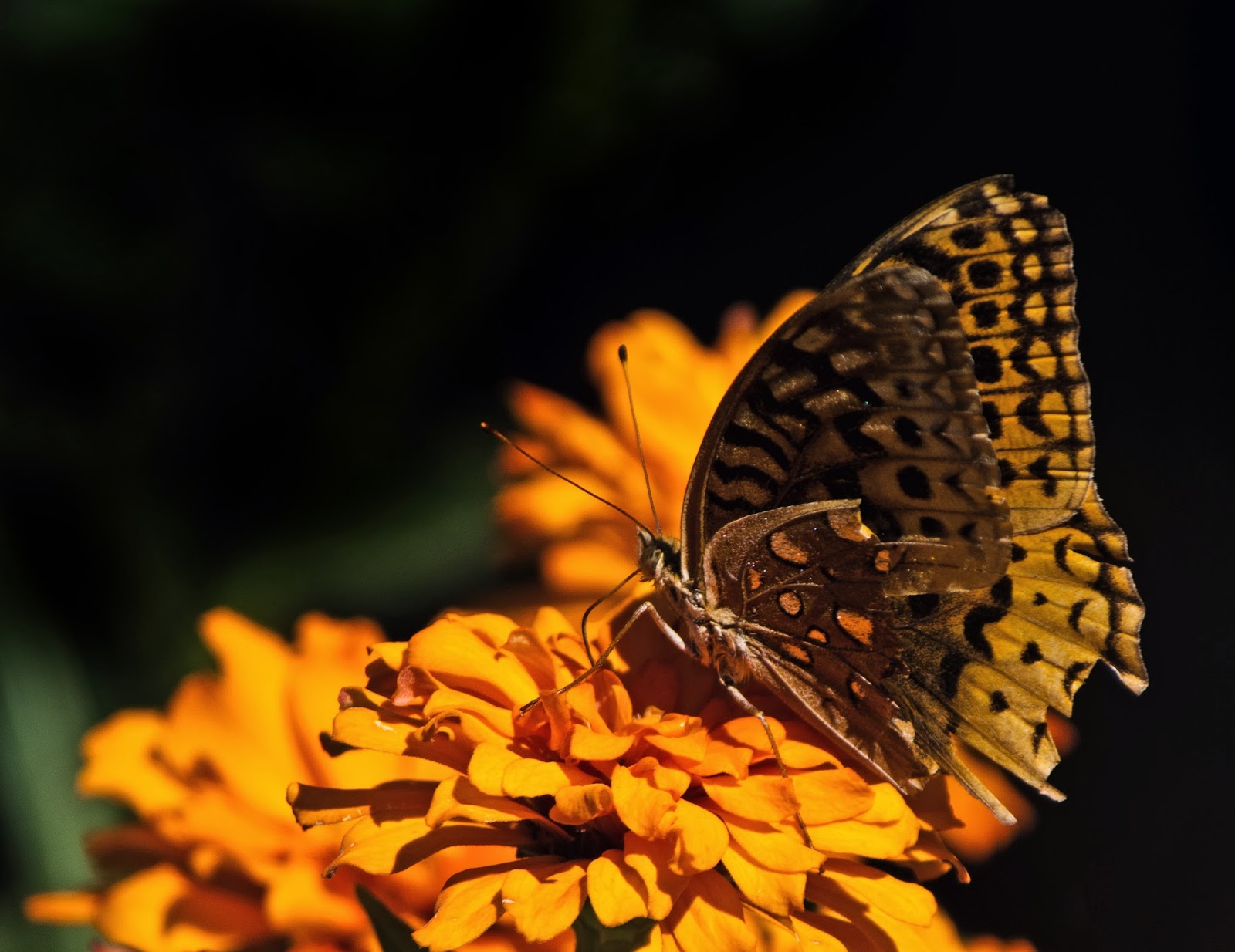 Certain types of flies help pollinate early spring plants. These flies are attracted to the smell of carrion or rotting flesh. They are drawn to brownish yellow or red flowers that mimic the color and sometimes the odor of carrion. The early blooming skunk cabbage is a prime example. The red trillium is another flower that emits a putrid odor that attracts flies.
Other types of flies are also highly specialized pollinators. Tiny midges, about the size of the head of a pin, are the only known pollinators of cacao blooms – something to think about the next time you’re eating chocolate.

Beetles
Because there are so many types of beetles, they help pollinate over 80 percent of all flowering plants around the world. Beetles are often called “mess and soil” pollinators because they perform that function as they eat their way through flowers. Beetles have a strong sense of smell and are important pollinators for very old species of plants, such as magnolias. Beetles prefer blooms that are bowl shaped, white to greenish colored, and have strong scents.

Hummingbirds
Hummingbirds are nectar-feeding birds that are adapted to feeding on nectar from tube shaped blossoms, such as those of the trumpet vine and cardinal flower.  They are attracted to large red or orange tubular flowers.  These birds do not have a strong sense of smell, and these flowers tend to be odorless.

Bats
Like moths, bats are nocturnal pollinators. They are especially important in the tropics and in desert areas. More than 300 species of fruit, including mangoes and bananas, depend on bats for pollination. Bats are initially attracted to flowers using their sight, smell, and echo-location.  Bats are the only pollinators who make use of an excellent spatial memory in order to visit the same flowers repeatedly.

Pollinators are vital to the health of our ecosystems and yet they are under attack because of loss of habitat and increased use of pesticides. They need adequate sources of food, shelter, water, and nesting sites in order to survive.

Posted by heart of the garden at 6:04 PM